What are the differences between AGV and AMR anyway? 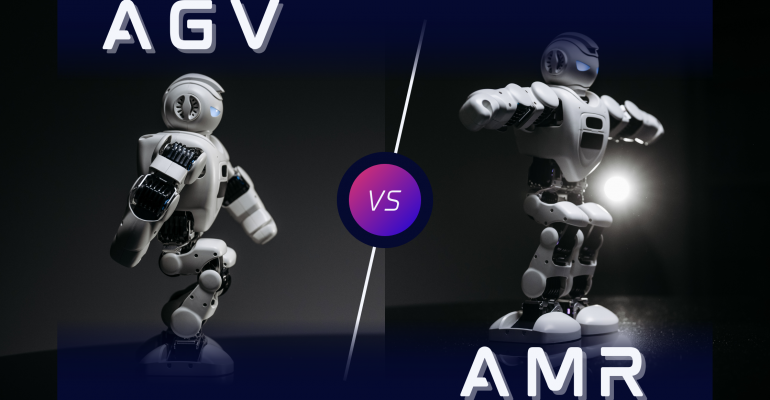 What are the differences between AGV and AMR anyway?

Automated guided vehicle systems are meant to help make tasks that put humans at risk, like lifting heavy objects or moving them repeatedly.

The main advantage of AGV is simplicity. When you can see a line on the floor, it is intuitively apparent where the robot has to go and what it has to do. Suppliers often make kits so that robots can be built in several forms factors. The other advantage is the moderate cost of the robot. However, this is often overshadowed by the high setup cost.

The main drawback of most AGVs is a lack of flexibility. Once they are set up, it’s generally difficult to change where they go. There is a high cost to set up, particularly for models which require wire guides or embedded magnets in the floor.

AMR systems do not require lines to be placed in the facility to allow them to follow. Instead, they use autonomous navigation systems to determine the way to go. They’ve been available since the nineties.

A typical autonomous navigation system uses a LIDAR, a laser range finder capable of scanning the room to determine the distance to the walls in all directions. Sophisticated software algorithms attempt to match this scan to a pre-stored room map to display the robot’s location. Other sophisticated algorithms can plan a path in the room, and the robots can execute those paths to get to their destination.

This approach has many benefits. It allows complete flexibility in determining the mission. You can pick a point anywhere on the map of your facility, and the robot will efficiently go there.

Those routes can change on each and every mission if desired. Because each route is individually optimized for each task, the transit times are often lower.

The downsides to all that sophistication, however, are also fairly clear. These solutions require expensive sensors, expensive computers and expensive software.

Typically, AMRs cost double or triple the cost of an AGV, with prices commonly in the $30k-per-robot range. Secondly, because the robot can go anywhere in the facility, that can also include the problem of running into other robots, so you need an additional piece of software known as a fleet manager, which ensures that robots do not collide. They typically only work for robots from one manufacturer and, as such, cause vendor lock-in.

What is Smart AGV?

Smart AGV is the newest class of mobile conveyance robots, sitting between AMR and AGV and attempting to avoid the inflexibility of the AGV while retaining its operation’s intuitive aspects at a cost-effective price.

They still follow fixed paths, like all AGVs, but they retain a high degree of ability to choose the path they follow. In most environments, it is possible to set up enough paths to get the smart-AGV to go wherever you want it to go. In this way, you can recover most of the flexibility you typically get from an AMR but at a lower cost and complexity.

Smart-AGVs have been available since the 2020s; Some follow lines to ensure they remain on the correct path but have high-level navigation systems to ensure a relatively short path to the goal. Other designs use markers that can be stuck to the floor and direct the robot. Markers offer additional flexibility; they can often transmit more information than just position, and some can give instructions to the robot.

We have created a white paper to get all the information about AGV, AMR and SMART AGV. Download the white paper now –

Copyright © Ubiquity Robotics Inc. 2021
Select the fields to be shown. Others will be hidden. Drag and drop to rearrange the order.
Click outside to hide the comparison bar
Compare
0
0
Your Cart
Your cart is emptyReturn to Shop